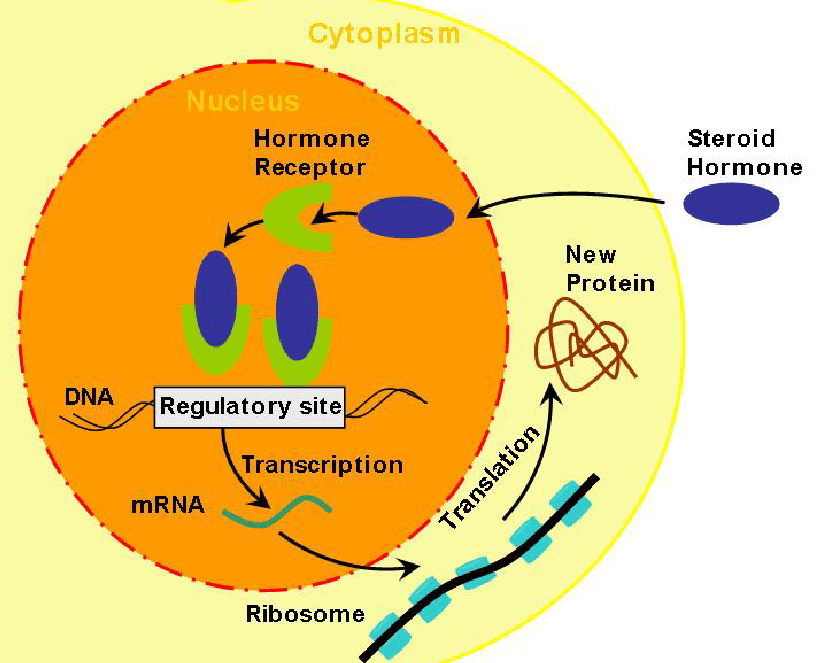 Because all steroid hormones are derived from cholesterol, they are not soluble in plasma or other body fluids. As a result, the steroids bind to transport proteins that increase their half-life and ensure ubiquitous distribution. Protein-bound steroids are in equilibrium with a small fraction of free steroids, which are “active.” Steroids can act rapidly, by binding to cell surface receptors, or slowly, by binding to cytoplasmic or nucleic receptors, ultimately activating gene transcription. 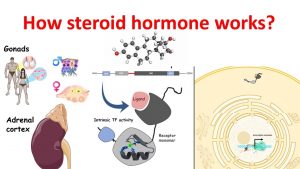 The term “androgen” refers to any steroid hormone that has masculinizing effects. In men, androgens are responsible for the development of secondary sexual characteristics. Androgens play a less important role in women; however, adrenal androgens are responsible for much of the growth of pubic and axillary hair. Testosterone is the main androgen. Androgens are produced in the adrenal glands and the gonads. In men, the adrenal glands produce about 100 μg/day of testosterone and the testes produce about 7,000 μg/day. In women, 50% to 60% of testosterone is derived from androstenedione conversion in peripheral tissues, 30% is produced directly by the adrenal glands and 20% by the ovary.

Adrenarche, therefore, begins well before puberty. Adrenal androgen secretion is partially regulated by corticotropin but also by other unknown factors. The testes secrete testosterone, dihydrotestosterone (DHT), and androstenedione. Gonadal androgen production is controlled by the hypothalamic secretion of GnRH, which causes the anterior pituitary to release follicle-stimulating hormone (FSH) and luteinizing hormone (LH). Testosterone is secreted by the Leydig cells of the testes in response to LH stimulation. Most of the testosterone is converted to the more active DHT in target tissues.

In women, the main function of estrogen is to promote the proliferation and growth of specific cells in the body that is responsible for the development of most secondary sexual characteristics. Progestins are responsible for preparing the uterus for pregnancy and the breasts for lactation. In men, estrogens and progestins generally do not play a clinically significant role in the development of sexual characteristics. In women, estrogens and progestins are derived from the adrenal gland or the gonads. In women with intact ovaries, the adrenal contribution to circulating estrogen is negligible. Estrogens and progestins are secreted at different rates during different parts of the female menstrual cycle.

Estradiol is the prominent ovarian estrogen; estrone and estriol are two other estrogens. Estradiol is 12 times more potent than estrone and 80 times more potent than estriol. The ovaries produce estrone in small amounts, but most of it is formed by peripheral conversion from androgens. Estriol is primarily a metabolite of estrone and estradiol in non-pregnant women. In pregnancy, however, estriol is the main placental estrogen. DHEA-S from the fetal adrenal glands is converted to estriol by the placenta.

The main progestin is progesterone; a minor progestin is 17-hydroxy-progesterone. In the first half of the menstrual cycle, small amounts of progesterone are produced, about half by the ovaries and half by the adrenal cortex. Larger amounts of progesterone are secreted in the last half of the menstrual cycle by the corpus luteum. Men produce a small amount of estrogen (about 1/5 of the production of a non-pregnant woman). Sertoli cells convert a small amount of testosterone to estrogen. Also, estrogens are formed from testosterone and androstenediol in the periphery of the liver.